One pressing question among Keurig users is “can you use K-cups twice?” K-Cups are single-use pods by design, but this results in a lot of extra trash in landfills.

In fact, the inventor of the Keurig himself has regretted his invention due to the environmental impact. However, people have come up with rather ingenious solutions for reusing K-cups.

Keurigs are great coffee machines, but this is an obvious pitfall.

Can you use the same K-Cup twice?

Ideally, you shouldn’t use the same K-cup twice. K-Cups are single use, and the best solution for reducing your environmental footprint from Keurig is to get a reusable K-cup.

However, if you already have some K-Cups that you don’t wish to throw out, you can simply peel the lid off, empty out the used grounds, and add your own grounds, then replace the lid with something like this. Lids for K-cups are really cheap! 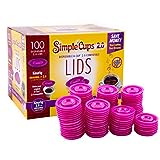 When you peel the lid off, you’ll see a little paper filter inside the pod. You can just empty out the grounds and rinse out the filter to get any old coffee aromas out. Finally, let it dry, and you’re good to go for refilling and reusing in your Keurig coffee maker.

Just stick the lid back on and you can use it again. For even better results, try to align the K-cup in the second use with the needle hole so you don’t end up with multiple holes in the K-cup.

Some people even suggest that since Keurigs are capable of 12 ounce brews from a single pod, so you could hypothetically extract two cups of coffee from a single pod: one good 6 oz cup and one meh 6 oz cup.

However, if you go through this post on whether it is possible to reuse coffee grounds, you’ll see that most of the good flavors are expended in the first brew and subsequent brews will not taste pleasant at all, so it’s best to just stick with one cup per pod.

So now that you’ve seen that to reuse K-cups for brewing is not quite straightforward, let’s talk about some other creative ways to use K-cups.

How to use reusable K-Cups

The best way to avoid single serve pods and even save money in the long run is to get the reusable My K-Cup. If you decide to use the My K-Cup, you can still brew all the brew sizes you’re used to from Keurig, but with a far greater degree of control.

To use the My K-Cup, get some of your favorite ground coffee and fill the pod with it. Most pods use between 9 to 18 grams of coffee.

Since you’re in control of your cup, you can actually match the amount of coffee grounds you put in to the volume you wish to brew!

For even better tasting coffee, get yourself some freshly roasted coffee beans and grind them just before adding to your K-Cup.

This is an added step, but the improvement in flavor is so significant that you’ll never go back to pods.

Finally, replace the lid on your pod and start brewing!

Other ways to reuse K-cups

The guys at Mental Floss have put together a list of ways to reuse K-Cups. Here are our favorites:

K-Cups are the perfect size to use as planters for starting seedlings. Just remove the lid fully, remove the paper filter, and fill with soil.

Press in 3 to 4 seeds of your choice, add some water, and let your plants sprout!

For an added sustainability bonus, mix in some used coffee grounds for a nutrient boost for your young seedling.

Interestingly enough, the pod already has a hole on the bottom from the time you used it which can now serve as a water drainage hole.

Once your seedlings are big enough, you can transfer them into bigger pots.

If you’re into art, K-cups happen to be the ideal size for filling with small amounts of paint. This will help contain your paints in one spot, and you can designate a bit of parchment paper or an arcylic palette for mixing colors together.

You could even use them for making bath paints for your child to play with during bathtime.

3. Use them as popsicle moulds

A K-cup is just about big enough to make a really nice bite-size popsicle. Fill it up with juice, sherbet, or any beverage of your choice. Insert a popsicle stick and put it in the freezer. Once frozen, just loosen the frozen popsicle out of the K-cup and enjoy.

4. Repurpose for a crafts project

Craft and school projects often require odd bits and bobs of plastic that you’d have to cut up from a multitude of things. K-Cups happen to be quite a steady supply of plastic that you can cut and repurpose into anything. For example, you could add a little brim to the bottom of a K-Cup, paint it, and turn it into a small hat!

5. Use for sorting loose bits and bobs

We’ve all got that one drawer that’s full of loose bits and bobs that we never get around to organizing. Why not put an array of used K-cups, label them, and organize all the buttons, pins, lithium batteries, and loose change lying around?

It’s not the best idea to reuse K-cups, and you could, but should not use K-cups twice. Ideally, get the My K-Cup to use your own coffee grounds, and if you’ve already got some pods that you don’t want to throw away, get some replaceable foil lids.