On this page, we’ll explore the moka pot vs French press debate. We’ll discuss the basics of each approach to brewing coffee and make suggestions about which you might like to try. From coffee taste to how a French press works, we’ve got you covered.

So, what even is a moka pot and how does it work as a coffee maker? In short, a moka pot is a stovetop espresso maker that’s popular among coffee lovers around the world. If you know what you’re doing, you’ll be able to produce rich, full bodied coffee that’s absolutely delicious.

Most moka pots produce a much more concentrated brew than your average French press. They use the following three chambers:

To use a moka pot at home, you’ll fill the bottom chamber with some water and put your ground of choice in the section above. Next, you’ll place your machine on the stovetop (this is where the name ‘stovetop espresso maker’ comes from!).

This process heats the water until it evaporates as steam. This steam passes through your coffee grounds and condenses as your finished coffee.

The beans you choose to use with your moka pot are up to you. However, you should use fine to medium fine coffee grounds for best results.

If buying pre-ground coffee beans, look for a moka pot symbol or guidance that suggests that the coarseness of the product is suitable for moka pots.

There are tons of stovetop espresso makers out there that all produce pretty great options. The most iconic brand is probably Bialetti, but most moka pots these days are relatively affordable and work great! 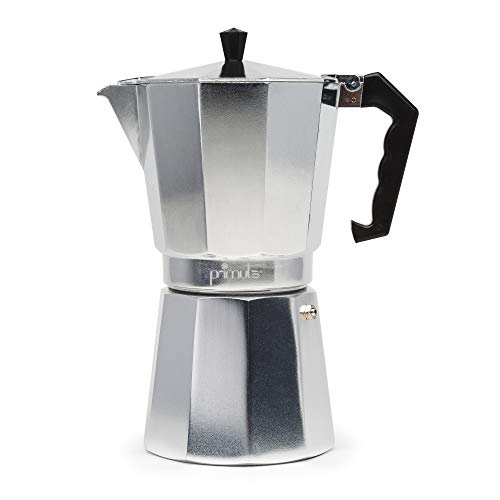 Moka Pots At a Glance:

So, what about French press coffee makers? A French press is also capable of producing delicious coffee, but requires next to no skill to use! They’re shaped like a jug with a metal filter that gets plunged through your coffee to help you get your caffeine fix.

You’ll want coarsely ground beans for a French press, at least when compared to the beans used with a moka pot. To make coffee with your French press, first add your ground coffee into the ‘jug’ part of the tool. Use about one tablespoon of coffee per cup of water.

Next, add some recently boiled water into the jug and stir thoroughly. Make sure it’s not completely boiling water as this will be too hot for your coffee. Some people like to ‘bloom’ their coffee before fully adding the water. This involves pouring just enough water over your grounds to dampen them.

The idea is to then wait for around 30 seconds to allow for the trapped CO2 in the grounds to escape. You should see small bubbles forming and sometimes popping on your coffee. After 30 seconds, you can add the rest of your water.

Feel free to skip this ‘blooming’ step if you’d like, though; it’s mostly reserved for coffee snobs with a bit too much free time! 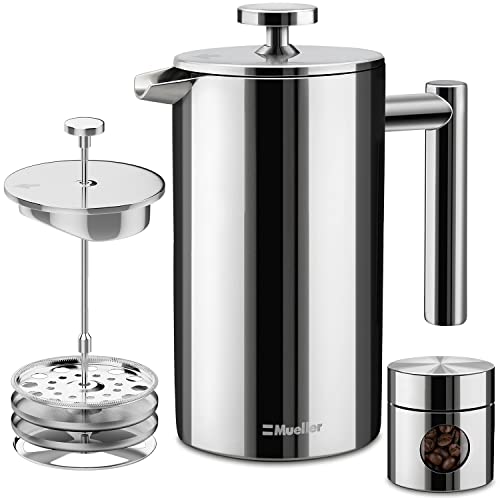 French Press at a Glance:

These are the basics of most French presses:

There’s a staggering number of ways to brew coffee these days. Moka pots and French presses just happen to be two of the easiest options. Question is, which is better? In this section, we’ll run through a few direct comparisons to help you reach your own conclusion.

It’s important to note here that both coffee brewers produce coffee that’s delicious if you know what you’re doing. Remember that the perfect cup of coffee is about so much more than the tool you use.

You’ll also have to consider the following if you care about getting a flavorful coffee:

As mentioned above, the tool you use when making coffee is just one part of a broader picture. That said, those who prefer coffee from an espresso machine might like moka coffee more overall. As a general rule, moka pots brew a more bitter coffee that’s perhaps a little darker than your average French press creation.

In the same vein, a French press can be a great way to make a more mellow pot of coffee. This isn’t to say that you’ll always get a richer flavor with a moka pot or that a French press can only produce a milder cup of coffee; the amount of grounds you use for your brewing method matters too.

While both of these options are relatively straightforward after one or two uses, the brew method with a French press is pretty idiot-proof. You just put some coffee in, pour over some hot water, and plunge the filter.

The brewing method with moka pots isn’t exactly rocket science, but it will take a little trial and error before you can produce a coffee that you enjoy. Most of the time, you’ll be using a medium heat to brew your coffee, but you’ll have to learn what works best for your stove.

If you’re using an electric stove, things can also take a little getting used to.

If you need an option that’s dishwasher safe, go with the French press. Just make sure you take the filter apart before starting the cycle so that everything gets cleaned properly. Unfortunately, the water chamber and other components of a moka pot are generally hand-wash only.

Both options can be a little annoying to clean but you’ll soon get used to either a French press or moka pot in our opinion.

Make sure that your drain can handle wet coffee grounds before pouring them down the sink. In most cases, it’s best to dispose of coffee grounds through your garbage disposal or compost bin.

So, which option has more caffeine? Keep in mind that the amount of coffee you add when brewing comes in to play here. In general, though, moka pots produce coffee that has more caffeine overall. If you’d like to learn more about the caffeine content of different coffee drinks, this white paper from the University of Newcastle and Crema Coffee Garage is worth a look.

The coffee grinder you have at home or the type of coffee that’s available in your area may affect the option that works best for you. As a general rule, a French press uses more coarsely ground coffee than their moka counterparts.

There’s not typically much of a price difference when it comes to coarse vs fine ground coffee so this will come down to what’s available near you and which device you prefer.

In a world of premium espresso machine prices, both moka pots and French presses come out looking pretty affordable. Both can be picked up for anywhere between $15 and $80. If you can afford it, go for a slightly more premium option that will last longer and may be easier to clean.

Remember that while Bialetti make the most ‘iconic’ moka pot, you’re mostly paying for the illustration of a man on the surface of the machine!

The biggest moka pot will produce around 12 small cups of coffee. The biggest French press out there can make up to 36 oz of coffee, or around 6 cups. Keep in mind that a French press is a touch easier to just dump a bunch of coffee/ water into; a moka pot involves waiting for pressure to push the water through your grounds.

Which Moka Pot Should I Buy?

As long as it’s not suspiciously cheap or made from flimsy materials you’ve never heard of, most moka pots out there should serve you fairly well; this technique has been around for quite some time now after all.

If you’re looking for a specific recommendation, though, we think this one from Amazon is well worth a look. 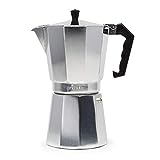 Which French Press Should I Buy

The filter is the main thing to double-check when buying a French press. In most cases, though, it’s hard to go wrong with this kind of purchase. Just avoid the super cheap ones. For our money, we’d go with this one from Amazon. 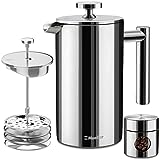 Which Makes the Best Tasting Coffee?

Honestly, it just depends on the kind of coffee you prefer. If you like ‘punchier’ espresso based drinks, a moka pot is probably the way to go. If you want an idiot-proof option that still makes a fantastic, more mellow brew, a French press will be your best friend.

When deciding which one to go for, we recommend reflecting on your own preferences as a coffee drinker.

If these apply to you, you’re a moka drinker.

If they don’t, go with the French press!