While some people may consider the debate of iced coffee vs hot coffee as a debate of us vs them, I think of iced coffee and hot coffee more as yin and yang. They’re both coffee, after all, so we should love them both equally regardless of brewing method!

However, people do have personal preferences so I decided to do some digging and see what objective (and subjective) differences I could find between iced and hot coffee. 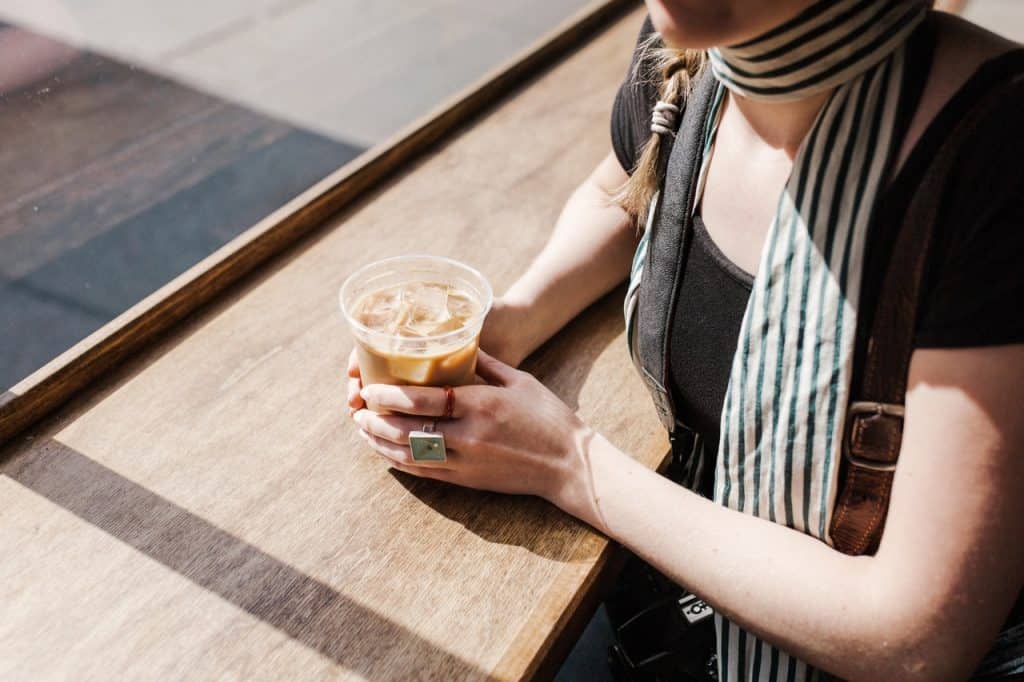 1. Does iced coffee have more caffeine?

Caffeine content really depends more upon the volume of coffee you’re drinking than anything else. For example, a shot of espresso contains less caffeine than an 8 oz cup of brewed coffee, but that’s because the espresso shot is just 1-2 ounces, whereas a cup is a whole lot more.

To really compare which of the two coffees iced or hot has more caffeine, we have to dig a little deeper and see how the coffee was actually prepared.

For arguments’ sake, let’s assume that the hot coffee in question is simple dripped coffee using a medium roast and 8 ounces of it.

Iced coffee is not quite straightforward, since you can make iced coffee in quite a few different ways.

The easiest way to make iced coffee is to let dripped coffee cool down and then throw some ice cubes into it. In this case, iced coffee is just hot-brewed coffee, served cold, so the caffeine content will be pretty much the same between iced or hot, which is between 100 to 200 mg per cup.

Iced coffee from an espresso shot

Another way to make iced coffee – usually lattes or frappuccinos – is by adding an espresso shot to a cup of frozen or iced milk. In this case, it depends on if you get a single or a double shot. A single shot of espresso contains 50-70 mg of caffeine, and a double shot will contain 100-150 mg.

Iced coffee made with a single shot of espresso will have less caffeine than regular hot coffee, and a double shot will be almost at par.

Cold brew coffee has been really taking off for the past few years and for good reason, it seems. Cold brew coffee is refreshing and has a much mellower flavor than regular coffee.

The interesting thing is that cold brew has very similar amounts of caffeine as hot brewed coffee, but the caffeine is released much more gradually into the bloodstream, so you’ll feel the effect for much longer.

2. Is it better to have iced coffee instead of hot coffee in the morning?

Many of us can’t start our mornings properly unless we have a good cup of coffee. In fact, as I am sitting here writing this, I have a steaming mug of coffee next to me that I am sipping in between sentences(it’s morning here).

One question that comes up is can you have coffee on an empty stomach? Presumably this is first thing in the morning, right?

The answer is a bit complex, but the general idea is that hot coffee is a bit towards the acidic side, and consuming an acidic beverage first thing in the morning may cause issues with some people.

However, keep in mind that hundreds of millions – if not billions – of people have coffee first thing in the morning every day and they’re still fine.

Note: This is NOT medical advice, and only purely anecdotal. If you have concerns about your health, please talk to your doctor.

Regardless of whether you’re having hot coffee or iced brewed coffee, the acid content is going to be quite similar.

Cold brew coffee has the goodness of coffee and has been shown to have much less acid content. This is because hot brewing releases a lot more of the oils and acidic compounds that give coffee a sour/bitter taste. If reflux or high acidity is a pain point for you, then consider switching to cold brew in the morning.

Since the brewing process is so much more gentle(cold water molecules are much more lethargic), cold brew is much less acidic.

A study found that cold brew contains 3 times less acid than hot brewed coffee, and cited that the lower temperature of cold brew results in less of the oils in coffee getting oxidized, which contributes to the sour/bitter taste of coffee.

3. Does iced coffee have less calories?

Iced coffee and hot coffee are very much on par when it comes to calorie count, until you start adding flavorings like creamers and sugar.

Assuming you throw some ice into this preparation and drink it as iced coffee, you’re consuming the same 28 calories for about 8 ounces of liquid.

The moment you step out of your house and head over to Dunkin Donuts or Starbucks, though, things get messy.

If you were just counting calories, you could have 4 cups of coffee with milk and sugar at home for the same number of calories you’re getting from 1 Starbucks cafe latte.

Once you venture into frappuccinos and the like, where milk is the dominant ingredient, the calories start going through the roof.

As an extension of calorie content, serving size also comes into play. While you may only drink 6 to 8 ounces of black coffee, you will probably not think twice before ordering 12 ounces or more of an iced coffee or frappuccino.

Consequently, even though you may have only had one iced coffee, you’ll actually have consumed many more calories.

Like I said above, iced coffee has tons of variations whereas cold brew coffee is pretty much standard. Of course it does depend on how you modify it before drinking.

When brewed hot and poured over ice, iced coffee will take the same 4-5 minutes to brew as hot coffee. Of course, you may have to wait a few minutes to get it to cool enough.

After all of this comparison and debate, the question remains: which is healthier? Hot or iced coffee?

In terms of caffeine, we saw that iced and hot coffee are pretty much at par(including cold brew coffee).

In terms of calories, it’s the same: iced and hot coffee are pretty much at par, unless you start adding milk or cream or sugar.

In terms of acidity, iced coffee can either be the same as hot coffee, or if you’re using cold brew, it will be significantly less.

If you have a sensitive stomach and are prone to acid reflux, then cold brew may be easier on your system than hot coffee, certainly first thing in the morning.

There are lots of other claims about the benefits of cold brew over hot brew:

One out of the box health benefit of cold brew, however, is that the milder taste will encourage people to have cold brew without or with less sugar than hot coffee, so you’re saving on both calories and cutting back on sugar at the same time.

Next up in our icy hot comparison is cold brew vs hot brewed coffee. We’ve talked about this subject in great detail in our post on cold brew coffee, but I’m going to recap it here very shortly.

Hot brewed coffee is brewed using water that has been heated up to 195-205 degrees C, and the flavors are extracted very quickly from the coffee grounds because the hot water molecules have so much energy.

Cold brew coffee is brewed using cold water, so the extraction process is much more gradual and gentle, and instead of the few minutes it takes to brew hot coffee, this takes anywhere between 12 to 24 hours.