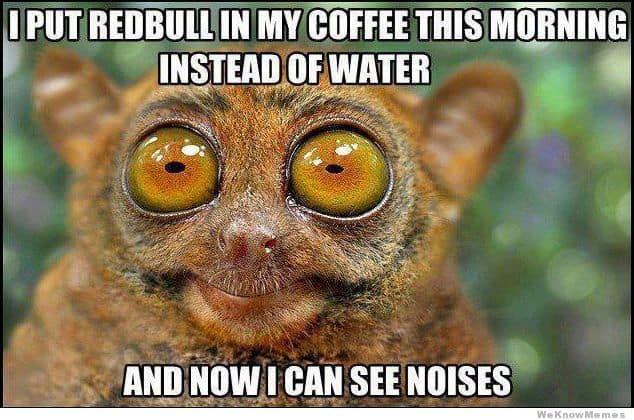 For students, professionals, and party-goers, a hit of caffeine is exactly what the doctor ordered. Coffee and Red Bull seem to be most people’s preferred shot.

When you’re working against the clock to finish a paper, a report, or you just want to stop yourself from falling asleep, many people opt for a shot of caffeine to help them power through.

But which one is really more effective? Coffee or Red Bull? And is it possible to create the ultimate monster by brewing coffee in Red Bull?

Coffee has been around for thousands of years, and we’ve realized a long ago that this heavenly brown liquid is a really potent pick-me-up.

Even though the preparation methods have changed with changes in technology and culture, the basic idea remains the same: coffee beans are roasted, then ground, then brewed in water.

How much they’re roasted, how finely or coarsely they’re ground, and the method they’re brewed using all make a difference in the final product.

So how much caffeine is in one 8 ounce cup of coffee?

However, caffeine is not the only stimulant present in Red Bull – there is another compound called taurine.

Taurine influences and boosts some bodily functions, but the full effects of it are not yet known.

One can of Red Bull contains 1 gram of taurine, and the maximum amount of taurine an adult can safely consume in one day without the risk of serious long term effects is 3 grams.

Why is there such a wide range in the amount of coffee? There are many factors.

So what factors influence how much caffeine is in coffee?

Beans: Coffee beans are of a very wide variety and different beans will contain different amounts of caffeine. Here is a list of some of the different beans available and the caffeine content per bean(in percentages). Source.

However, darker roasts do have more flavor, so it’s kind of a catch-22. More flavor = less caffeine, and less flavor = more caffeine.

Preparation and cup size: Obviously, cup size will make a huge difference in the amount of caffeine. That goes without saying!

The preparation method will also play a big part.

Here are some common preparations, and the average caffeine amount per preparation.

So there you have it – that’s how much caffeine there is in coffee.

Obviously, the tastes of the different preparations will vary – mostly from the type of roast used. In a nutshell:

According to the Mayo Clinic, the upper limit for caffeine consumption for adults is 400 mg per day. That’s about 4 to 5 cups of brewed coffee.

Children should only have minimal amounts of caffeine, and adolescents should also go easy.

That’s not to say that caffeine is bad! In limited amounts, it’s actually good for you!

Too much caffeine can cause a host of symptoms:

So how does caffeine get absorbed in our bodies, and what exactly does it do?

Caffeine is very easily absorbed through the membranes of your body’s cells, so from the moment you take the first sip of coffee, caffeine absorption starts in your mouth and continues to your stomach and gut.

Within 45 minutes, 99% of the caffeine is absorbed.

Caffeine has a half-life of about 4 to 6 hours – in simpler terms, you’ll feel the effects of caffeine for 4 to 6 hours before the compound breaks down and you’ll stop feeling the effects.

Once caffeine is in your bloodstream, it is broken down by the liver into theophylline, theobromine, and paraxanthine.

These chemicals then go to various places in your body and influence changes.

Your genes also have something to do with it! Some people possess a gene which makes them metabolize caffeine slower than others.

The largest effect caffeine has is on your brain. Caffeine blocks receptors in your brain cells from binding to a compound called adenosine.

Adenosine influences the sleep-wake cycle by inducing drowsiness, so by preventing adenosine from binding to your cells, you’re effectively masking the effects of feeling drowsy.

Caffeine also increases the effeciency of a hormone called dopamine, which is the reward hormone – the compound that makes you feel good.

Theophylline, one of the by-products of caffeine, relaxes smooth muscles in your body – these include the muscles in your gut(which is why you feel the need to go to the bathroom) and those in your lungs, too.

It has also been shown to have a diuretic effect, which means it makes your body release more water in urine. The by-products of caffeine metabolism are expelled from the body once they are filtered through the kidneys.

Some people will experience a “crash” once the effects of caffeine wear off – this is because the once-blocked adenosine is now flooding the brain, causing a sudden onset of drowsiness, as well as a drop in dopamine.

Finally, there are three general levels of caffeine sensitivity – not everyone feels the same effects of caffeine!

How to get more caffeine in one go

One unfortunate way that some folks have tried to up their caffeine intake in one go is by using the ungodly combination of coffee and Red Bull in a single beverage.

The few people that I’ve read about who have tried this were barely able to swallow the swill they managed to end up with.

If you still wish to try it, here are some things to keep in mind:

However, there is a better solution: use caffeinated water. Water Joe is a water company I stumbled across that sells caffeinated water. Except caffeine is tasteless, so essentially, you’re getting a hit of caffeine without having to drink coffee OR Red Bull.

If you want to bump up your caffeine intake, use Water Joe to brew your coffee. Since it’s just water and caffeine, it will brew completely normally and you’ll have your same great tasting cup of coffee, only with a lot more caffeine in it.

I’d still recommend using a French Press, although you could try an espresso, too.