Coffee can be expensive, and if you drink more than one cup per day, the cost can add up fast.

Especially because coffee grounds are single-use, unlike a used teabag, which you can toss into some cold water for an infusion.

All this leads to a burning question: can you reuse coffee grounds to make more coffee? 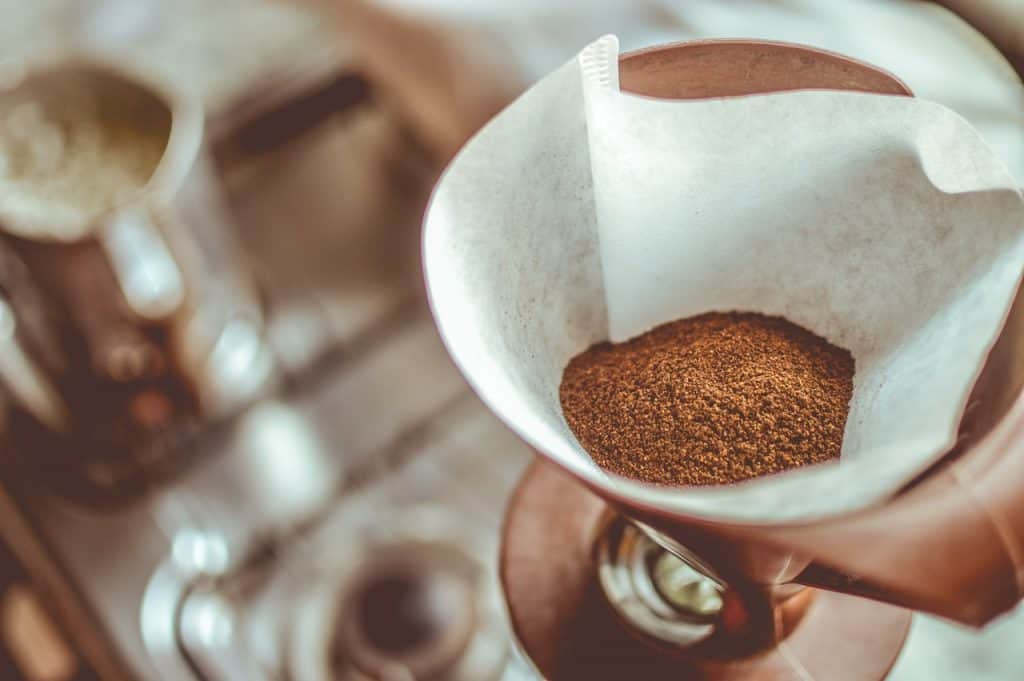 Photo by Caio Resende from Pexels

Can you reuse coffee grounds to make more coffee?

While you could drink coffee made with reused coffee grounds, you really don’t want to.

Here’s why re-brewing coffee grounds is a bad idea:

Coffee beans contain flavor compounds, solids, and oils(and of course caffeine) – this is the good stuff that makes coffee the beverage we know and love.

When coffee is ground, more surface area of the coffee is exposed, so when you brew it in water, these compounds are extracted from the ground coffee into your cup of coffee.

As you can imagine, there is a limited number of compounds, and once you’ve brewed the grounds, a lot of those compounds would have been extracted.

In most brewing methods, the bulk of the good tasting compounds are extracted, and the compounds left are very bitter and acidic.

If you were to use the coffee grounds twice, you’d end up with a cup of coffee of a lighter color and bitter, more acidic taste.

You probably wouldn’t be able to stomach the coffee without adding heaps of milk and sugar!

Another issue that comes up with reusing coffee grounds(especially the next day) is that they are incredibly wet once used, and if left outside, become a breeding ground for bacteria.

Can you reuse coffee grounds for cold brew?

What about brewing coffee grounds twice to make cold brew in the second round, where you’d let the coffee steep for much longer, and the flavor will be much mellower?

Considering that you’ll probably end up mixing the cold brew with milk or ice to dilute it, you might be able to get away with it and not really notice the flavor changes.

However, you’re sacrificing lots of potential quality for a few cents, so if the reason behind reusing coffee is to save some money, perhaps you’d be better off getting a less expensive brand of coffee and brewing fresh every time!

Coffee is an incredibly versatile plant, and coffee grounds are full of nutrients and good stuff even after a good how brew. We may not like the taste of what’s left, though!

Coffee grounds smell really good, and they are also superb at absorbing other odors. So whether you want to stifle the smell coming from a trash can, or keep food odors from mixing in the fridge, or keep a closet from smelling moldy, you can use coffee grounds.

Simply tie up the coffee grounds in a porous cloth like an old pantyhose, a cheesecloth, or even a loosely woven handkerchief, and toss it wherever you want – hang it inside a dumpster, or place it in the fridge or cupboard. Just make sure that the grounds are dry first!

Smelly shoes are no match for coffee grounds, too! Sprinkle some dry coffee grounds into your shoes(sprinkle, not dump!) and leave them overnight, and shake them out in the morning. Goodbye smelly shoes!

Need to clean up a drain? You can pour some used coffee grounds boiled in water(again) down a drain to help unclog it. The coffee and water mixture will take some of the gunk with it, and the coffee will neutralize the smell. You can do this any number of times, too, without fearing for damaging the pipes or drain.

Coffee grounds are quite jagged and abrasive, so you can use them for heavy and rough cleaning, too. If you have some pots and pans that are heavily caked, or a surprisingly stubborn spot on your kitchen counter, just sprinkle coffee grounds on the surface and scrub with a sponge. The coffee’s abrasive properties and deodorizing properties will work in tandem and help get a lot of the gunk off.

Before sprinkling them on your counter, do a small spot to make sure there are no adverse reactions with the color or anything.

An awesome way to reuse coffee grounds is by putting them back into the ground(hehe). Coffee grounds are full of nutrients that plants absolutely love, so using them in your garden or on your household plants is a super idea.

You can put some grounds into the soil, or even mix them in some water and use as a spray.

If you’re into worm farming(vermiculture), then not only do worms not mind used coffee grounds – they love them!

What’s better for a coffee enthusiast(addict) than smelling like coffee all day long?

Use your old coffee grounds as an exfoliating body scrub or face/hand wash. Just mix them into some soap, and use the concoction whenever you wash hands or shower.

Remember to wash them off with cool water, not hot water.

I would not use them every time, but rather whenever you need some serious exfoliating. The abrasiveness of the coffee grounds will help remove the dead skin cells.

It’s also said that sprinkling a few coffee grounds(a few being the key here, you don’t want to dump it all out) forms an effective barrier against some types of insects such as ants.

You can try sprinkling some dried coffee grounds in an ant-prone cabinet and it will help keep them away.

If you have coffee grounds that are similar in tone to some of your wooden furniture, you can use some coffee grounds to mask any scratches in the surface. It won’t go so far as to fill the surface up, but you can stain the exposed inside of the wood again to make it look better.

The key here is to use a very little amount of damp coffee grounds. Add some on to the spot you wish to stain, and use a Q-tip or paper towel to gently rub the excess off.

It may take a couple of passes for the stain to fully transfer over.

Here is an example of a New York Strip steak that uses coffee grounds as a rub.

We already mentioned coffee’s deodorizing properties above, but a more specific use is to get the raw onion/garlic smell out of your hands.

Chopping onions and garlic can result in a pretty pungent odor sticking to your hands, so just incorporate some coffee grounds into your soap(squirt out some soap and drop a few grounds into it before you start rubbing your hands) and it will go a long way towards getting the smell out of your hands.

When in Rome, do as the Romans do.

If you drink coffee as often as I do, chances are you have a white t-shirt with a little spot of coffee on it. Coffee stains are notoriously difficult to get out, so if you want to go all the way, just dunk your shirt into a mixture of coffee grounds and water and dye the whole thing to a gorgeous coffee color!

If you have an indoor fireplace, you know how difficult it is to clean ashes without potentially getting them everywhere!

Sprinkling some coffee grounds onto the ashes helps weigh them down so you can clean it up with more ease.

Hypothetically, you can use any kind of heavy ground substance, but chances are you will have a lot of used coffee lying around.

How to dry coffee grounds

Most of the uses called for above depend on the coffee grounds being dry, otherwise they become havens for bacteria and other nasties like mold and fungi.

To dry coffee grounds quickly, let’s go back to middle school science – water evaporates faster if more of the water is exposed to the air.

Apply the same principle here – the water in your coffee grounds will evaporate faster if more surface area is exposed to the air. Just spread out the coffee grounds in a dish and leave them out, they’ll dry very quickly.

Even though you may have opened this post hoping to get a resounding yes for reusing coffee grounds to prepare your favorite beverage, I hope you still walk away with some creative and environmentally friendly ways you can reuse coffee grounds.