There are so many fancy shmancy names for coffees: latte, cappuccino, ristretto, lungo, macchiato, and the list goes on and on. A really popular coffee beverage is a latte. So what is a latte, anyway?

What is a latte?

Latte, originally known in Italy as caffe latte, is simple an espresso shot with milk added to it. At this point, you’re probably thinking “aren’t most similar drinks just made with espresso and milk?”

Yes, but the key difference between lattes, cappuccinos, mochas, macchiatos, and flat whites is the amount of milk used in the espresso shot.

A latte is made with:

That’s really it! There are lots of variations of lattes commonly found in American coffee chains, but they’re all based off of this original recipe.

Caffe lattes have actually been around for a very long time, and they’re a really good way to enjoy espresso if you can’t handle the intensity of the espresso shot.

The milk tames the flavor and you still get that coffee goodness without the intensity.

Caffe lattes are also a good start to build up your palate and tolerance towards espresso.

Once you’ve developed a taste for lattes(without sugar of course), you can opt for a cappuccino, then a macchiato, and finally a straight espresso shot. How strong is a latte?

In terms of strength, working from strongest to weakest, the order would be:

How to make a latte

Nespresso machines will work, too.

You can also have a separate, dedicated espresso machine and a separate milk frother if you wish.

Pour the coffee into the steamed milk and enjoy.

Some people may also like to pour the milk into the coffee – it’s really up to you.

The more popular method is to pour the espresso into the milk.

How to steam milk for lattes

Since a huge part of the latte is steaming milk, you need to know how to steam and froth milk.

For making steamed or frothed milk, the best thing to use is an automatic milk frother or the steam wand on your espresso machine.

Essentially, the process of frothing milk is by blowing hot steam through milk to make nice air bubbles inside the milk.

Steamed milk is less foamy, where the milk has increased in volume by about 1/3 due to the air.

Frothed milk is very foamy and the volume of milk has nearly doubled.

For making steamed milk, place the milk so the steam wand is about one inch into the milk and hold it an angle. As the steam comes into the milk, you’ll notice a whirlpool effect.

Frothing starts the same way, except as you see foam on the surface of the milk, gradually push the wand deeper and deeper into the milk until it hits the bottom of the cup. 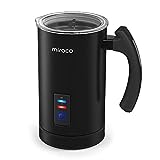 How to make a latte without an espresso machine

Since the first step in making a good latte is making a good shot of espresso, we thought we’d talk about making an espresso shot first.

There’s already a pretty comprehensive list of ways to make an espresso without a machine here, so we’ll only talk about our favorite method: the Aeropress.

The Aeropress is really cheap and we really recommend picking one up. It will totally change the way you brew coffee. 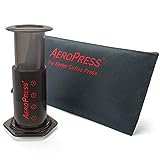 One reason the Aeropress is such a favorite is that it brews the closest thing possible to an espresso shot without actually using an espresso machine.

To brew an espresso in your Aeropress, place the paper filter inside the filter basket and latch it on to the bottom of the Aeropress. Put your freshly ground coffee(we can’t stop stressing how important this is) and pour 185-190 degrees F(90ish degrees C) water on them up to the 1 mark on the Aeropress.

Give it a quick stir and wait 30 seconds, then insert the plunger and start pushing down. You’ll need to apply quite a bit of force! Push down until you hear a hissing sound, and that signals the water has been pushed out all the way and you’ve got a shot of espresso.

Note: You can use any other method to brew strong coffee, too. Just brew 1-2 ounces as that’s all you need. If you don’t have an Aeropress on hand, you can use a Moka pot, too.

Now you have to make the foamed milk. Foaming milk without a steaming wand is actually a lot of fun and a great way to release some frustration(the coffee will do plenty of that, too).

To foam some milk without a frother, fill a jar halfway with milk(try to use a jar that’s about 10 ounces so you can fill 5 ounces of milk), close the lid, and give it a good shake for about 1 minute. You’ll see lots of bubbles form in the milk: froth!

Now microwave the milk for 30 seconds, uncovered of course, so the milk gets nice and warm and the foam rises to the top.

Now that the milk and coffee are ready, pour the milk into the coffee. Use a spoon to hold back the foam so first, only milk is mixing, after which you can finally spoon on as much foam as you like possible.

Note: You can also use a manual frother to froth hot milk.

What is a mocha latte?

Now lets talk about mocha coffee. Mocha coffee was actually named after the port in Yemen where coffee beans were traded from.

Mocha coffee beans, the ones first ever grown for consumption, actually have a very deep and chocolatey flavor. To complement and enhance the chocolate flavor, cafes often add chocolate or hot cocoa to the espresso.

Since hot cocoa is made from cocoa, it’s quite strong! It actually boosts the strength of the espresso and you get a chocolatey explosion in your mouth with every sip.

The drink is layered as:

What is a Latte? (And how to make great lattes at home)

Lattes are delicious and rich drinks that can be enjoyed any time. Incidentally, lattes are also great gateway coffees to wean yourself off of adding sugar and sweetener to your coffee. The large volume of milk dulls the intensity a little, and from lattes, you can graduate to cappuccinos and finally straight up espresso shots!

That said, even if you enjoy straight espresso, there’s nothing wrong with enjoying a good latte, too!

Coffee Brewster is the #1 coffee resource on the web. Learn more here.
Get in touch with us here.