What is nitro cold brew?

As the name suggests, nitro cold brew is cold brew coffee infused with nitrogen gas. The nitrogen infusion gives it a bubbly, smooth, and foamy mouthfeel, as well as contributing a little bit of sweetness without having to add any sugar.

It’s actually a win-win situation because cold brew coffee is not that intense anyway, and when mixed with the smooth, foamy nitrogen infusion, you have a trifecta of sweetness, smoothness, and coffee that tastes too good to describe in words!

Interestingly, nitro brews were originally used in beers – foamy beers like Guinness use nitrogen for the foaming effect because nitrogen bubbles are smaller and stay trapped in the liquid for longer, compared to carbon dioxide bubbles, which are much bigger and will go flat much sooner.

The concept of nitro was then applied to cold brew coffee and a whole new beverage was born. You can theoretically apply this principle to any drink you want: it will work with iced tea and even fruit juices.

How to make nitro cold brew coffee at home

You can’t have nitro cold brew without cold brew, so the first step is to make yourself some good cold brew coffee!

To make cold brew coffee, get your hands on some freshly roasted coffee beans. Next up, grind the beans to a very coarse consistency. Since cold brew is a slow brewing process and in cold water, coarse grounds work the best. Too fine grounds will result in muddy and over-extracted coffee, and we don’t want that!

Next, measure out your coffee grounds. There’s a lot of ratios you can use, but my preferred ratio is 1 part coffee to 8 parts water, so if you’re using 1000 ml of water, use 125 grams of coffee.

If you want a stronger brew, use a 1:4 ratio and put 250 grams of coffee instead. Either way, you’ll be diluting the coffee before you drink it, so 1 liter will last a while, or should at least be enough for quite a few people!

You can use any kind of vessel to brew, but I like to use a french press since it contains the grounds very nicely and is easy to pour and clean up from.

Put the coffee grounds into the french press, and pour the cold water over the grounds. If the grounds float to the top, give it a very gentle stir one or two times just to evenly wet the grounds.

Place the top of the french press on, but do not plunge!

Put the french press into your refrigerator and let it brew for 12 to 24 hours.

After the time has passed, very gently plunge down. Be careful here, as you don’t want to agitate the grounds. That can end up releasing acidic compounds and messing up your beautiful coffee.

Pour the coffee out into a jug or mason jar, and store it in the fridge until you are ready to use it.

You don’t need any fancy, expensive kegs or systems to make nitro cold brew. You can actually make it using a whipped cream dispenser that you can buy for comparatively cheap. You’ll need to refill/purchase new cartridges every now and then, though.

In order to make nitro cold brew with a whipped cream dispenser, pour your diluted cold brew(ready to drink) into the whipper and seal it. Charge the canister with one shot of nitrous oxide(see below) and give it a good shake for 30 seconds.

Discharge the gas using the trigger, and once the gas is fully discharged, you can open the canister and pour your nitro cold brew into a glass.

Pour it over ice for best enjoyment. 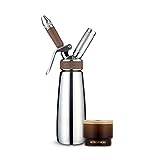 The NitroPress by Hatfields London builds on the design of the classic whipped cream dispenser and takes it a step further by working with nitrogen, nitrous oxide, and carbon dioxide to make a variety of drinks.

The design is pretty much the same as any whipped cream dispenser: the main chamber holds the beverage you wish to infuse with the gas. The top contains the dispenser, a trigger, and a spot to lock the cartridge on to.

To make whipped cream, you can use nitrous oxide cartridges.

For carbonating drinks, you can use carbon dioxide cartridges.

You can also store the entire NitroPress in the fridge.

The reason we’re big fans of the NitroPress DIY system is because of its flexibility. For a single investment, you’re essentially getting three devices in one.

The only downside is that the maximum capacity is 500ml, which is not much when it comes to cold brew. Realistically, you’ll only be able to make enough for two people before you have to refill the bottle.

For some of you, though, the small footprint may be just what you are looking for. If you’re the only one in your household who enjoys nitro cold brew and don’t want to purchase an entire keg for just an occasional nitro cold brew, this is a great choice. 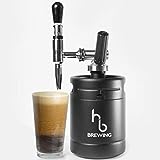 For a more traditional nitro cold brew out of a keg, the HB Brewing Keg is a nice choice that has a small footprint and dispenses velvety smooth coffee.

It’s important to note that the keg does not brew the coffee: you must make your cold brew separately and then add it to the keg for infusing with nitrogen.

Like all kegs and nitrogen infusion systems, the HB Brewing keg uses cartridges that you must purchase separately.

The Keg itself is 64 ounces, which means you can easily dispense about 6 to 8 glasses of cold brew.

One thing we really like about the design is the little handle that’s built in as a recess in the side of the keg. It’s really easy to pick up and move around, and because of it’s small footprint, it will fit in your fridge, too. 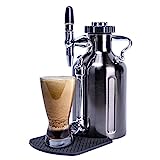 The GrowlerWerks uKeg Nitro cold brew kit(50 oz) is the most expensive system on this list, but it stands out because it can also brew your cold brew coffee too.

That makes it a really nice all-in-one system.

The GrowlerWerks kit comes with 4 coffee bags that you can fill with coffee grounds to make your cold brew. Alternatively, you can use store-bought cold brew and pour it directly, too.

The entire keg is double-walled for maximum insulation, so you’ll be able to pour a really nice, cold beverage every single time.

One really nice touch is the silicone serving mat that fits into the profile of the keg. You place your glass on the mat before dispensing to prevent spills and slips.

The aesthetics of this nitro cold brew kit are really attractive, too. It would make for a nice conversation piece in your kitchen!

The stainless steel handle is comfortable to grip and you can easily carry it from place to place.

Making nitro cold brew at home is a great way to save a little money and enjoy a part of the coffee-making process at home. Most manufacturers advertise that making nitro at home is significantly cheaper than buying Nitro cold brew from a cafe, and that’s true to an extent.

The cartridges are a little expensive and they’re single-use, so you have to factor that in to your cost. You also have to consider that cold brew requires a lot more coffee and yields comparatively less liquid per grounds than hot coffee!

Overall, cold brew is on the pricier side whether you make it at home or buy it from the store, but being able to make nitro cold brew on demand is certainly really cool and is sure to turn heads when you’re entertaining guests.