Coffee is enjoyed pretty much all over the world, and everywhere you go, there’s a different way of enjoying it. Not to mention there are so many different kinds of coffee beans, too. So that got me to digging around and trying to make a list of all – or most – of the types of coffee found today.

Before getting into coffee preparations, we first have to talk about coffee beans.

This knowledge will also help you make better, more informed choices at a coffee shop.

Coffee shops are an iconic part of our culture. They’re a place to just go and hang out with your friends, sip some coffee, and get some work done.

Interestingly enough, Starbucks pioneered the whole idea of “coffee culture” in the United States. Italian coffee shops have been community gathering spots for a long time. Back in the day, nobody would hang out at a coffee shop! They’d just get their coffee and go.

Starbucks decided to introduce the Italian concept of coffee shops to the United States and the rest is history. In this post, we’ll talk a little bit about the things you’ll find on a coffee shop menu.

If you’re hoping to open a coffee shop of your own, I hope this helps you in deciding how to develop your menu. If you just want to be more informed the next time you go to a coffee shop, you’ll enjoy this post!

Note: I won’t go into too much detail about things to eat – the focus of this post is mostly coffee beverages. 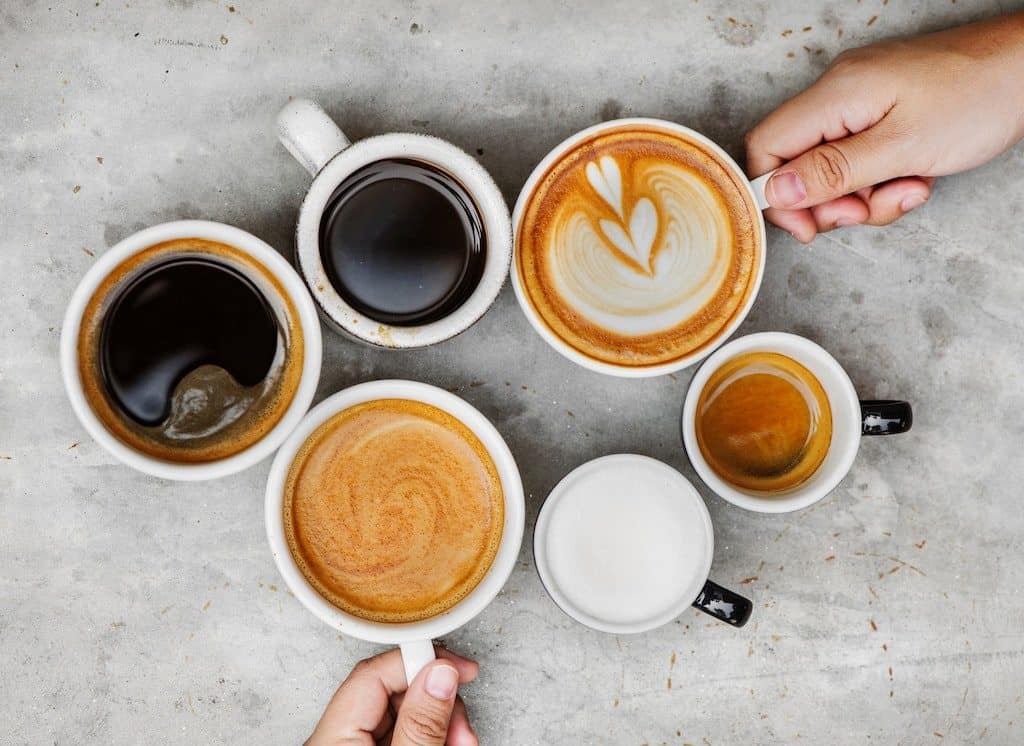 Broadly speaking, coffee beans can be grouped into two families that we all know about: Arabica and Robusta. There are some key differences between these two beans, but if you’ve had coffee almost anywhere, chances are you’ve either tasted Arabica or Robusta.

Arabica coffee is grown mostly in Latin America and Africa and it’s a very flavorful, complex bean. All the fruity, floral, nutty, and earthy flavors that coffees have are because they are Arabica coffees. Of course, the flavor profile will change depending on where it’s grown and what kind of Arabica bean it is.

Arabica beans are also very sensitive to any environmental changes. They’re temperamental, so to speak, so even a slight change in a factor(water, temperature, altitude, soil) can have a huge negative effect on the coffee and can even spoil an entire crop.

Over 60% of the coffee consumed over the world today is Arabica coffee. It’s best brewed hot, and it’s the kind of coffee you want to enjoy black to be able to fully experience the flavors.

Most of the remaining 30-40% of coffee consumed in the world is Robusta coffee. Robusta beans are strong, bitter, and contain more caffeine than Arabica beans. So if you’re drinking a special espresso blend, it may contain some Robusta beans.

They’re also much hardier than Arabica beans. While even slight changes can mess up an Arabica crop, Robusta beans are much more resistant to environmental changes and diseases. They’ll still manage to grow, though the proper conditions will definitely result in a higher yield and better crop.

Robusta beans are also used in most instant coffees(which is why they’ll end up having more caffeine). Also, the super high caffeine coffees such as the one made by Death Wish Coffee uses Robusta beans as Arabica just doesn’t have enough caffeine to get to the levels those guys are looking for.

Two lesser known types of coffee are Liberica and Excelsa. Liberica coffee gained popularity when a disease nearly wiped out the entire Arabica crop in the late 19th century.

The Excelsa bean(actually just a sub-species of Liberica) is quite unique. While Arabica coffee grows on tree-shrubs no more than 6 feet tall, Excelsa grows on trees that can reach up to 20 feet high. They’re quite flavorful, and are mostly used to add into coffee blends for an extra kick rather than being sold as is.

Along with Arabica and Robusta, two more terms than are thrown around in the coffee world are varieties and varietals. What exactly do these two words mean?

A variety refers to a specific subspecies within the coffee family. A varietal is the particular brew that you’d make from the specific species of coffee.

Varieties include those that occur naturally, as well as mutations and hybrids(plants that have been “encouraged” to grow by crossing them with one another).

While all of this makes for a fascinating read if you enjoy science and botany, if you’re just here for learning how to make good coffee, this extra information is great trivia for a coffee break but with or without it, you can still make good coffee 🙂

As coffee consumers, we don’t really need to worry about varieties. Most good coffee roasters and brands go quite deep into the science, though, since they’re directly in contact with the farmers who are out there growing the stuff.

Still, since we’re all about making everyone a coffee expert, let’s talk a little bit about some of the more common varieties. Most of these varieties belong to the Arabica family.

Typica is the most common variety of Arabica coffee. Typica originated from Yemen before spreading all over the world, first reaching India and then Indonesia, followed by the Caribbean. Most of the popular coffees we drink today such as Kona, Java, and others are all Typica varieties.

A popular sub-category of Typica coffee is Bourbon. Bourbon coffee gets its name the same way Bourbon vanilla got its name. Not from the hard liquor, but from the island of Bourbon where the Imperial French liked to take their discoveries.

Bourbon plants are more hardy and they produce more fruit.

Having nothing to do with Japan, Geisha is actually one of the most original varieties of Arabica coffee. It got its name from the village in Ethiopia where it is from. Gesha or Geisha variety coffee is resistant to diseases like coffee rust.

Even though it got its start in Africa, it’s now mostly found in Panama. It’s amazing how far and wide coffee beans have traveled!

So far, we’ve covered only a few of the varieties of coffee but our goal was just to give you an overview. There’s a lot more digging you can do especially if you go through the Wikipedia article on coffee varieties. From there, you should be able to read up on each individual variety, too.

If you’d like to try new coffees every so often, consider checking out Trade.com, where you’ll be able to find lots of craft varieties and lesser known brands.

I’ve got to add a disclaimer here that this is at best a “sort of” comprehensive list because there’s just no way a single person can account for all the varieties of coffees made throughout the world in just a single blog post.

Perhaps it can be the life work of someone, like compiling a dictionary.

Anyhow, this is an attempted list of the most commonly enjoyed coffee drinks enjoyed all over today.

Black coffee: the quintessential cup of coffee, black coffee is served straight without any additives. You can experience the true flavors of coffee in a cup of black coffee. Learn how to enjoy it here.

Coffee with added sugar or milk: This is pretty much black coffee with a splash of milk, cream, or sugar(or a combination fo the three) to slightly dull the intensity of the coffee.

Espresso: Made from very fine coffee grounds and a smaller quantity of water, espresso relies on high pressure to extract a flavorful and intense shot of coffee. You can easily make espresso at home.

Filter/drip coffee: Coffee grounds are placed in a paper filter and water is poured over it. The water mixes with the coffee as gravity pulls it down through the filter(paper or reusable) and into the carafe or cup below. Some machines do drip and single serve together.

French press: Coffee grounds are steeped in hot water and a fine mesh plunger is used to separate the coffee and the grounds.

Iced coffee: Unlike cold brew coffee, iced coffee is usually a drip coffee or espresso shot which is poured over ice or refrigerated to cool down.

Moka pot: Pressurized steam is used to force water through coffee grounds, absorbing the flavor as it rises up.

Siphon or vacuum coffee: A funky looking contraption uses heat, pressure, and a vacuum effect to force water through coffee grounds and brew coffee. A good example is the Bodum Santos or Pebo.

Cortado: Basically an espresso with a tiny amount of milk added to mellow down the acidity.

Caffe Gommosa: A funky creation, this is an espresso shot poured over a marshmallow.

Doppio: A double shot of espresso

Cafe Con Hielo: An iced espresso, this is essentially a double shot served over some ice cubes.

Lungo: An espresso made with more water to make a full sized coffee

Ristretto: This is a super concentrated espresso shot as its made with less water

Guillermo: Espresso shots poured over slices of lime, and occasionally with added ice

Espresso Romano: Espresso with lime on the side(Guillermo has it poured over the lime)

Caffe Americano: Very similar to a lungo, this is an espresso that’s been diluted with water to make a full sized black coffee

Cafe Zorro: Double shot of espresso added to an equal amount of water

Cafe au lait: The same as an Antoccino, except the milk is scalded rather than steamed

Cappuccino: A combination of steamed and foamed milk with a shot of espresso

Breve: Espresso with added equal amounts of milk and cream

Latte: 6 to 8 ounces of steamed milk with a shot of espresso added in. Like a cappuccino, but much more milky

Flat white: Very similar to a latte, but the milk is prepared slightly differently

Espressino: A combination of espresso, cocoa powder, and steamed milk

Coffee and espresso from over the world

Caffe Creama: Served in Austria, Northern Italy, and Switzerland, this is a long espresso drink

Cafe Bombon: A Spanish drink, this is an espresso with added condensed milk

Cafe Cubano: As the name suggests, this drink is from Cuba. It’s an espresso with demerara sugar.

Turkish Coffee: Made from superfine grounds and boiled with water in a small pot, this is a very common drink in the Middle East.

Kopi susu: This coffee is made with condensed milk and as the coffee cools, the grounds will fall to the bottom

Ca phe sua da: A Vietnamese coffee that means iced milk coffee. It’s made with black coffee, a lot of condensed milk, and poured over ice.

Qishr: A Yemeni drink made from dried coffee cherries, it is more of a tea than a coffee.

Mocha: Pretty much a latte, except it has chowcolate syrup added to it

Chai Latte: A mix of coffee and tea, this is espresso combined with tea and steamed milk

Bulletproof coffee: Popular with keto dieters, this is a coffee blended with butter and coconut oil in a high speed blender

Cheese coffee: Coffee with a piece of cheese that has a bread texture. The cheese soaks up the coffee