Two extremely popular brewing methods in the United States and indeed worldwide are the Keurig and the french press. But if you’re torn between the two and want to know who comes out ahead in a comparison of Keurig vs french press, we’ve got you covered!

First off, we’d like to note that comparing Keurig to french press is very much like comparing apples to oranges, or indeed apples to carrots.

Keurig coffee makers use an interesting system of forcing hot water at high speed and pressure through a coffee pod called a K cup. The coffee pod contains coffee grounds in a paper filter.

Water is forced through a small needle which pierces the top of the pod. Water fills up the K cup and mixes with the coffee grounds, and the bottom of the pod is also pierced which lets the brewed coffee flow down.

Keurig’s main advantage is that this process enables it to produce a cup of coffee very fast. In fact, Keurigs keep a supply of hot water at the ready, so the time from inserting the K cup to having a cup of coffee in your hand is less than a minute!

French press is a classical way of brewing coffee. French press is an immersion brewing method, which means coffee grounds are steeped in hot water for a period of time – 4 minutes in this case.

Once 4 minutes are up, a filter attached to a plunger is used to separate the coffee grounds from the water.

You then pour out the coffee and enjoy.

French press is one of the easiest and most forgiving ways to brew coffee, giving points in the ease of use department. To start, you need coarsely ground coffee, which you add to the french press and pour almost boiling water over them.

Give the slurry a slight stir, replace the plunger, and wait 4 minutes. Once 4 minutes are up, your coffee is ready! 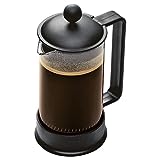 Keurig has a unique advantage of variety. There are hundreds of K Cups currently available which means you have a huge variety of coffees you can try.

K Cups come in nearly all flavors and roasts. You’ll find light, medium, and dark roasts, as well as pre-made cappuccinos and lattes.

K Cups are also available in variety packs which contain many different kinds of coffee that let you change up your coffee whenever you want.

Additionally, you can use your own coffee grounds with the My K-Cup reusable pod.

French press coffee can also be made with any kind of coffee, but medium-dark and dark roasts are best suited to this style of brewing.

There are plenty of craft roasters that you can pick up a medium-dark or dark roast from. You can order pre-ground coffee to the right consistency, or you can buy whole beans and grind at home.

Grinding at home just before brewing results in the best tasting coffee. For french press, you need a coarse ground which is almost the consistency of sea salt.

However, Keurig coffee tends to be very strong and intense, and for many people, the combination of a strong cup and the fast brewing time makes Keurig a winner in their books.

With most K Cups, you may not be able to pick up on the flavor notes, but you’ll definitely be able to distinguish between light, medium, and dark roasts.

You can also adjust the strength of Keurig coffee. Some Keurigs have a “Strong” button which lets you brew a stronger, more intense cup.

French press coffee tends to be very bold and full-bodied. It has a very thick mouthfeel, so it will feel very rich in your mouth.

Immersion brewing is great at extracting the earthier flavors in coffee, which is why we recommended medium-dark and dark roasts.

Other brewing methods like drip coffee brew a much cleaner cup which has less of a mouthfeel. This is because the french press has a simple metal mesh filter which does filter out many of the coarser grounds, but some small particles may still make it through.

This results in the last few sips of your coffee being gritty. Again, this is not a bad thing and many french press lovers savor this!

A 16 oz cup brewed into a thermos can probably last you throughout an entire day!

Additionally, most Keurigs have generously sized water tanks so you won’t need to refill until you’ve brewed quite a few cups.

French presses vary in size, from small presses that make coffee for just one person, to larger presses which can make multiple cups of coffee.

It may just be wiser to pick up a slightly larger french press as you can definitely make one cup in a larger press, and still have the capacity for more cups if you are brewing for more people.

A Keurig coffee maker is actually quite budget-friendly, with lower end models coming in at just under $100. However, more than the cost of the machine itself, the cost of coffee pods add up over time.

K Cups cost anything from $0.30-0.40 per pod. If you make multiple cups per day, the cost can add up over time. It’s definitely more expensive than buying coffee beans or coffee grounds.

Alternatively, you can get the My K-Cup reusable pod and use your own coffee grounds to save money and time.

A french press is a mechanically simple coffee maker, so it’s no surprise that they’re not that expensive. Even higher end french presses such as those made by Bodum can be found for around $30-40.

A hidden cost of french presses is that you need to have a hot water kettle and optionally a coffee grinder, too. These are all one-time investments, as you may already have a kettle and a good grinder can last you for years.

The cost of coffee is up to you: you can buy less expensive coffees or spend a little more on coffee beans(or grounds). For best results, we suggest getting high quality beans.

With coffee, you get what you pay for!

Keurigs are incredibly easy to clean up. Simply open the pod bay, remove the K-Cup, and you’re good to brew the second cup.

These machines do require deeper cleaning once or twice a month, and you should descale them once every 3 to 6 months.

Everyday clean up is quite simple.

Cleaning up highlights a hidden cost of Keurigs, which is the environmental cost. K cups are single-use and made out of plastic, so every cup of coffee you drink results in a K Cup going into a landfill.

Keurig is now in the process of making recyclable K cups which will have less of an impact on the environment.

Cleaning up after brewing french press coffee is also quite straightforward. You can simply knock the grounds out of the french press and rinse the press and the plunger clean.

The grounds can be repurposed into fertilizer, or you can compost them.

Coffee residue does not really stick and easily washes away with water, so you can just rinse it for every day use and wash it with warm soapy water once every few days.

For deep cleaning, you can take apart the plunger and wash each component individually, too.

The truth is that the differences are a bit more murky and both brewers appeal to a very different audience.

Keurig appeals to folks who want a fast and easy cup of coffee.