There’s no doubt that Nespresso machines are really awesome, but one point of confusion is the similarities and differences between various Nespresso machines. In this post, we’ll compare two of them: the Nespresso CitiZ vs Pixie. 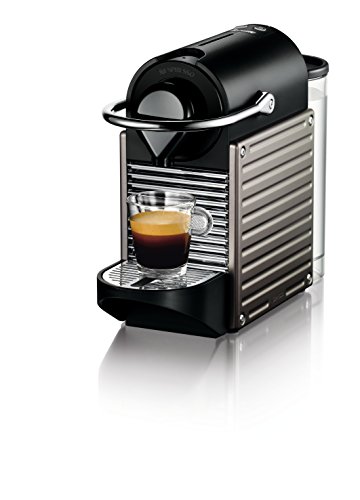 The tricky thing about comparing Nespresso coffee makers is how similar most of the machines are to one another. At a glance, it may seem like the price differences don’t really amount to anything major.

Before we compare the differences between the Nespresso Pixie and the Nespresso Citiz, it’s worth looking at how they both are similar.

OriginalLine brewers work with Nespresso capsules, refillable capsules, as well as a whole host of third-party compatible capsules from other manufacturers.

In my opinion, OriginalLine is the way to go. VertuoLine is too locked in the Nespresso ecosystem and the choice of coffee will also pale in comparison to what you can find in OriginalLine.

One of the signatures of Nespresso brewers is the 19 bar pressure extraction system. This extreme pressure results in a very strong, thick brew and a generous layer of crema on the top.

All standard Nespresso machines use the 19 bar extraction system, and the Pixie and CitiZ are no different.

It will also make a note of how much volume you extracted and will extract the same amount from a single touch of the button going forward.

The Citiz and Pixie are both standalone brewers, which means there is no milk frother built in. Depending on where you choose to buy from, you may be able to get an Aeroccino milk frother with the coffee machine as part of a bundle deal.

Now that we’ve got the similarities out of the way, let’s see the differences between the Citiz and the Pixie.

As is the case with Keurig coffee machines, the most important distinction from one Nespresso machine to the next is often the size of the water tank.

The Citiz has a 34 ounce water tank.

The Pixie has a 24 ounce water tank.

How important is water tank size? This is something that you must decide for yourself. One espresso shot pulled by a Nespresso machine has a volume of around 1.5 ounces.

From a 34 ounce water tank, you could pull 22 shots before needing to refill.

From a 24 ounce water tank, you could pull 16 shots before needing to refill.

Is this a dealbreaker? Hardly! Refilling the tank is just a minor inconvenience, but a larger water reservoir is definitely useful if you have a high vollume of people coming and making coffee.

Another water reservoir-related difference between the Pixie and the Citiz is that the Pixie has a red light indicator that comes on when the water reservoir is low on water. The CitiZ has no such indicator, and you’d just have to eyeball it before brewing some coffee to make sure there is enough.

It’s worth noting that the Pixie is a newer model, which is why it has the upgraded indicator. The absence of a larger water reservoir also means the Pixie has a slightly smaller footprint than the Citiz.

As we mentioned above, the Pixie is a slightly smaller machine.

The difference in size is quite minimal, but it’s definitely there. For a less imposing, sleeker model, go for the Pixie rather than the Citiz.

The Citiz has a longer, 3.6 foot power cord, compared to the Pixie, which has a 2.6 foot power cord. This is usually a non-issue for kitchens, as there are plenty of power points in most new kitchens. But if there’s no easy access to power in your preferred spot for these espresso machines, you’ll need an extension cord or surge protector.

For this last point in our comparison of Nespresso machines, it’s purely an aesthetics discussion rather than anything to do with functionality.

The Pixie has a more modern design with aluminum siding. It looks a lot more futuristic, and would fit very well in any modern kitchen.

The Citiz is all plastic and follows a more classical design paradigm.

If you’re really particular about the design and looks of your home, this could be an important deciding factor for you!

Both the Citiz and the Pixie have an adjustable drip tray that you can move up and down to accommodate various sizes of cups. Don’t forget to periodically clean out the drip tray!

The Pixie is available in two colors colors Titan and Electronic Titan, which are both fancy names for grey.

The Citiz is available in a single color only.

Both the Pixie and the Citiz are made for Nespresso by Breville and DeLonghi. Functionally, they’re both the same machine. If you shop around a little, you may be able to get one manufacturer’s model for a little cheaper than the other one.

The Citiz is sometimes called the Nespresso Classic, too, so bear that in mind when you’re looking around.

Here are links to all four machines on Amazon, as well as prices pulled live from Amazon using their API:

When comparing the Citiz vs the Pixie, you can see that the differences are quite minimal, if any. Unless the water reservoir size is extremely important to you, you can go with the Pixie or the Citiz and you’ll be a happy camper, as both are superb espresso machines that produce the best capsule coffee, period.