The coffee universe is full of interesting terminologies. One word that you see associated with coffee roasts is blonde roast. So what is a blonde roast coffee, and what makes it different?

Blonde roast coffee is quite misunderstood at times. After all, you know about light roasts, and you may even know about white roasts, but where exactly does blonde roast fit into the picture?

Blonde roast coffees are coffee beans that are roasted just up until or right after the first crack. These beans are much lighter than their medium roast and dark roast counterparts. The flavors are also more pronounced, and there is a lot more acidity. They’re called blonde roasts because of the lighter color of the bean. 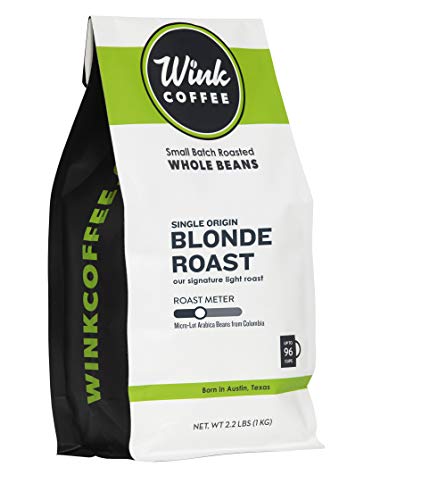 How did blonde roasts come about?

Starbucks began popularizing the use of “blonde roast” and “blonde espresso” in 2018. However, they’re not the first people to think of using very lightly roasted coffee beans.

A precursor to the blonde roast is the cinnamon roast, which was named so for it’s light brown color.

Like the blonde roast, the cinnamon roast is removed from the roaster right before or immediately at the first crack.

What’s the difference between light roasts and blonde roasts?

Drumroll…blonde roasts are the same thing as light roasts!

Blonde roasts are simply roasts that are roasted right up to the first crack. If you compared medium and dark roast beans(brunettes) with light roasts, they’d look like blondes.

Understanding the temperature ranges will help make this clearer.

Light roasts, blonde roasts, cinnamon roasts, light city roasts, and half city roasts are all roasted up to 350 to 400 degrees F.

Once the beans reach this temperature, they undergo the first crack.

The crack is the outer shell splitting to allow the expanding insides of the coffee bean to release all the built-up pressure.

At this temperature, the previously-green coffee beans get a light brown color, which is where all the names come from.

Medium roasts are also known as city roasts, american roasts, and breakfast roast. These are all heated between 410-428 degrees F.

They are usually removed from the roaster somewhere between the first and second crack.

Medium roasts have a dry exterior and a nice brown color. The taste is more mellow than a light roast, and the acidity is a little less, but still noticeable.

These are slightly darker in color and have stronger earthy notes.

Dark roast: 464 degrees F and beyond

Dark roasts are actually quite varied, as you have beans that are just on the dark spectrum and those that are almost charred.

Each of these roasts have a specific temperature they go up to. French roast is the strongest.

At this point, all the acidity has burned off, so you’re left with an intense and strongly caramelized bean.

Blonde roasts are known for their brightness or acidity. Because they’ve had comparatively less exposure to temperature, many of the acidic compounds are still in the coffee beans.

The resulting brew is very tangy and fruity, and a cold brew would almost taste like a strong fruit juice.

Coffees that have floral notes will have more pronounced flavors with blonde roasts as the sugars have not quite developed yet to overpower the acidity.

The sugars in coffee beans tend to develop later in the roasting process, closer to the medium roast range.

Blonde roasts are not sweet unless you temper the acidity with milk.

That’s why Starbucks’ blonde roasts taste sweet: they’re usually served with milk. You may also find that black coffee made with Starbucks blonde roast is also sweet: this is because their blonde roasts are actually roasted a little darker.

You can see this for yourself when you open a pack of blonde roast and see the beans.

How to brew blonde roasts

Another way to make a blonde roast is as a cold brew. Blonde roast cold brews taste delicious because of the fruity and bright flavors.

Does blonde roast have less caffeine?

Blonde roasts have pretty much the same amount of caffeine on average as any other roast. If you measure by volume, you’ll get more beans per scoop than by weight, in which case a cup of blonde roast coffee has marginally more caffeine.

Another point of confusion is between blonde and white coffee. Blonde roasts, as you’ve seen above, are the same as light roasts.

White coffee is actually roasted to an even lower temperature (350 degrees F) and the beans taste much nuttier than other roasts.

Blonde roast coffee is really delicious and acidic. However, the high acidity may not be suitable for everyone. If you’re a huge blonde roast fan but can’t handle the acidity, you can consider low-acid light roasts from LifeBoost coffee.

Get 50% off LifeBoost Light Roast Coffee!
Get your discount here